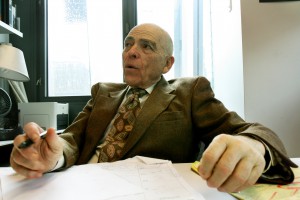 The Cooper Pioneer recently sat down with Professor Irv Brazinsky to discuss how he became interested in Chemical Engineering, what brought him to the Cooper Union, and his advice on learning engineering.

The Cooper Pioneer: Where are you originally from?

Irv Brazinsky: Well I was born in Manhattan right here at Beth Israel Hospital, and it’s right across the street from where I went to high school at Stuyvesant. I think my parents were living in Manhattan at the time, and I moved to Brooklyn when I was two and a half. I didn’t leave Brooklyn until after I graduated from Cooper Union, which was at age 21, and then I went to live in Cleveland for a summer. I’ve been around to some extent, I lived in Bethlehem, Pennsylvania for a year, I lived in Cleveland for a few years, and I lived in Boston for about ten years, and then I came back to Jersey. So, New York City area. But you could say I’m from Brooklyn.

TCP: Could you tell us a little bit about your educational and professional background?

IB: [I went to] public school, first through fourth grades, Hebrew Parochial School, fifth through eighth, then Stuyvesant High School, Cooper Union undergraduate, Master’s at Lehigh, and PhD at MIT. I worked for the National Aeronautics and Space Administration for a few years in Cleveland between Master’s and PhD, then I worked for several companies after MIT: Polaroid, Celanese, Foster-Wheeler, and I’d say I have about twenty-five years of industrial and government experience. Then, about thirty years at Cooper Union, late career, no, mid-career.

TCP: So what made you choose engineering and what do you like about chemical engineering?

IB: Well, originally, for some reason, I remember wanting to be a chemist. And in high school, my classmate Jack Fried said, “Oh, you should be a chem. engineer, because you like math, you like physics, [and] chemists don’t get into that,” of course he was wrong, and then, he told me about Cooper Union. So here was the chance to go to a great school and be an engineer. So the fact that Cooper Union offered engineering, and there was a heavy math and physics component made me decide to go into chem. engineering.

“…he told me about Cooper Union. So here was the chance to go to a great school and be an engineer.”

TCP: How do you think Cooper Union has changed since you were a student?

TCP: What brought you back to Cooper Union and when did you start working here?

IB: I started working here in 1985. Actually, what brought me back was, well, I was working in industry and I used to ride the bus with a guy name S.I. Cheng. We got to talk, and you know, I was coming out of New York and he was also, and it turned out that he was a professor at Cooper Union, so we had a lot to talk about. And then, he felt that I would fit in with the chemical engineering department, given my background, so he convinced me to apply to Cooper Union. So I applied, this was about 1984, and lo and behold, I got the job. I had to think long and hard about whether I wanted to change the focus of my career, from working in industry, doing design, and that’s one of the reasons Cooper hired me. And it took me a while. It was a good career move at that point.

However, I couldn’t leave right away, so I remember making the commitment during the summer of ’84, but I did not come to Cooper until fall of ’85. During that time there was a lot for me to finish up at Foster-Wheeler, which included three months in Dublin, Ireland working, basically, on Splenda. And we worked on the pilot plant to produce Splenda in a suburb of Dublin. After I came here in ’85, I must have spent about ten years consulting for Foster-Wheeler. Mostly the process I consulted on was the decaffeination of coffee using supercritical carbon dioxide. When I first came to Cooper, I used to give a lot of problems in thermo on that, not so much anymore.

The first few years I was here, ‘85 to ‘86, we had core curricula with curriculum coordinators. But we received a disastrous ABET review in ’85; I was here for about a month, and I was really shocked and I didn’t really know what was going on. And what they decided was that they would have more distinct departments. And they brought in a new dean, Eleanor Baum, and I think she’s an expert on ABET. And after she came, the whole school did great.

During my early years here, the chairman of the department was S.I. Cheng. He was chairman from when we reestablished departments, from ’86 to ’89, then he retired and I became chairman until this past year. Twenty-five years, that’s long enough.

TCP: How much do you like your job here at Cooper?

IB: I really like it very much. I look forward to it every morning despite my five-hour round trip door-to-door commute. I like the teaching, I like the research, and it’s really good interacting with the students that we have here. You can see that some of them are really interested in what you’re saying. And the research; I just came from a Cooper Cooler research meeting.

TCP: What advice would you give to Cooper students?

IB: Same thing I say in class: you’re not here to learn how to plug into a series of formulas; anyone can do that. You’re here to learn how to learn, [and] to understand what engineering is about. Engineering is very science-based, so pay strict attention to your math, physics, and chemistry courses. You get a lot of math, physics, and chemistry here; I think within each one of them, you’re probably a couple of courses short of what you would need to get a degree at other schools. Pay attention. Learn, don’t just memorize. And when you start getting into your initial fundamental engineering courses, which you do in each of the disciplines. Again, attack them not as a series of formulas, as you guys say, to plug into, but to really understand what you’re doing and learn how to apply. Learn how to think like an engineer, rather than be a grind. Oh, and don’t be afraid, when you go to grad school, to go for the best. Ultimately, what you can do because you went to Cooper Union is so good, and that will get recognized individually. So don’t get discouraged. You’ve gotta keep your chin up.

TCP: Do you have a favorite professor or colleague at Cooper?

IB: I kind of like most of the professors here; I don’t know that I should mention anyone in particular. Alright, I’ll mention a few. Jameel Ahmad, and the reason I’m going to mention him is because, when I was deciding whether to come to Cooper Union or not—and I took six months to make that decision when I was offered the job—Jameel Ahmad from Cooper Union came and gave a presentation at Foster-Wheeler. I was very impressed with him and I said, you know, maybe I should come to Cooper Union. Of course I didn’t tell him at the time. And when I showed up I said, “remember me from Foster-Wheeler?” S.I. Cheng, well he’s still alive, he’s 95, and I really liked him very much. I still visit him occasionally in Toms River, NJ. I kind of like colleagues of mine that I had when I was a student: Ellison, in physics, he has since passed away. When I came here, we overlapped by ten years, and he was a favorite of mine. John Bové, of course, was a tremendous favorite of mine. People always ask: did you have Professor Bové for organic? And I say no. He started teaching in September ’58, and I graduated in June ’58, so I missed him by a summer.

And then, of course, there’s Dean Baker. He and I bonded almost immediately after I started teaching at Cooper Union, and here’s why. I played one year of junior varsity and three years of varsity basketball for Cooper in the late 1950s. The varsity coach was Dave Tobey, who had also coached Savage University (a phys. ed. school) to two national championships in the late 1920s (equivalent to Division I today). The star of that Savage University team was “Honey” Baker, Dean Baker’s father.

There are many others, but I just mentioned a few.

TCP: What are some of your hobbies?

IB: I do a lot of reading. I read a lot of history, military history, [and] a lot of United States history. Of course [there’s also] sports; I can’t really play anymore, though I used to play. In fact, in the mid-90s, we had intramurals and I played on the Chemical Engineering intramural softball team [for] two years. I was the second baseman and Dean Baker was the third baseman. We won the championship each of those years. My hobbies used to be playing a lot of sports, which I can’t really do anymore, but I still swim for exercise. I watch sports, that’s a hobby. I love Broadway theater music, [and] I love Broadway musicals. I still go to the theater, even though it’s very expensive.

TCP: Do you have any closing remarks for the Cooper Pioneer?

IB: The thing with engineering is that there are just so many problems in the world that have to be solved. They need very heavy engineering input. I think that if you come to Cooper Union, you’re going to get a good education for that.