As the second semester starts to become overwhelming, some of the sports are coming to the end of their season while others are about to start. The women’s basketball team played Pratt Institute in the beginning of February. Even though it was a tough game, they never gave up and everyone was determined to do their best. The men’s basketball team also played Pratt Institute right after the women’s team. Although it was another tough game, the men’s team gave more than 100% and won the game, making the last point in the last couple of minutes of the game.Two weekends ago, the men’s basketball team traveled to Providence, RI and Boston, MA to participate in an Art School tournament, coming home with second place. The men’s basketball team just played New School this past weekend for their senior night, celebrating the dedication of their three seniors. The women’s basketball team will play Sarah Lawrence this weekend for the first time. The men’s volleyball season has started up, already playing Sarah Lawrence twice and Pratt once. They have an upcoming game with Medger Evers this week. The men’s tennis team is getting ready for their season, eagerly awaiting their South Carolina training trip which will also involve players from the women’s tennis, basketball, and volleyball teams. As the weather warms up, the cross country team can be seen running around the city. 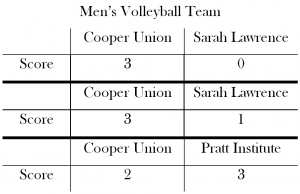 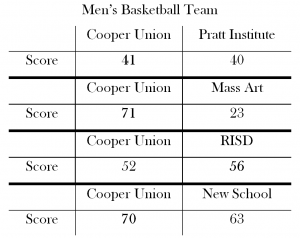