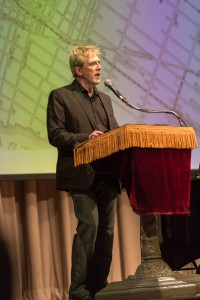 The Subway Map: The Last 50 Years, the Next 50 was held in the Great Hall last Tuesday night. Peter Lloyd, a writer and subway map aficionado, hosted the event, which featured three presentations and a six member panel discussion.

The presentations highlighted the various
approaches taken to map the one of the largest subway systems in the world. The specific approach to a map is quite the topic of contention: some cartographers are proponents of aesthetics and simplicity, while others strive for a “didactic” and accurate map.

Raleigh D’Adamo, winner of the MTA’s 1964 subway map contest, was the first to present. D’Adamo grew up close to New York’s public transportation system but pursued a career in law. After reading about the contest in the newspaper, D’Adamo proposed his concept of denoting each subway line by its own color. Previous subway maps used limited colors to show trivial information such as whether the track operated above or below ground. As D’Adamo observed in the proposal accompanying his map, “the conclusion is inescapable that maps of New York’s subway system are trying to make too few colors do too much work.”

Despite having limited cartography experience, D’Adamo won the contest and received a reward of $4,000 (about $30,000 today). D’Adamo later pursued a career in transportation, and his color coding concept is still found in today’s subway map.

Geographic accuracy in subway maps is sometimes sacrificed for clarity. For instance, the island of Manhattan is just too narrow on a true geographic map to feasibly accommodate all of the subway lines that run uptown and downtown.

In 1972, the New York subway map took a bold step away from accuracy in exchange for aesthetics and simplicity. Designed by the Italian designer Massimo Vignelli, the 1972 map featured bold parallel subway lines and exchanged curves for 45 and 90 degree angles. The Vignelli map was hailed by some as a genius work of art, while others disapproved of its inaccurate depiction of New York and focus on looks.

John Tauranac, a graphic designer who helped develop maps in the 70s, shared some of his current concepts for subway maps. His maps strive to be “didactic” and provide the necessary information as efficiently as possible. As Tauranac puts is, “there are many ways to skin a map.”

Following Tauranac was Eddie Jabour, designer of the iOS app KickMaps with his son, Dan. KickMaps is a real-time subway map that offers an alternative to the paper map and perhaps even Google Maps. Unlike paper and most electronic maps, KickMaps updates instantaneously removing the need for special maps on nights a weekends.

The panel also included three others with various approaches to subway maps. Sarah M. Kaufman from the NYU Rudin Center for Transportation spoke briefly about the transfer of open transit data from the MTA to app developers. Joe Brennan is the creator of one of the first digital maps of the New York subway system and shared some of his new designs. Neysa Pranger, from the firm Intersection, presented her company’s work on the “On the Go” map kiosks found in some subway stations.

Oree Livni (CE ’19), a fan of maps and city planning, thought that the event “represented the dichotomy that is Cooper Union” because subway maps are the “intersection of science and art.”

The event was a bit lengthy, lasting almost three hours. The presentations began late and ran longer than expected, which left little time for the panel discussion and audience questions. Despite the technical difficulties, the event was undoubtedly interesting and time well spent for those who truly enjoy cartography.