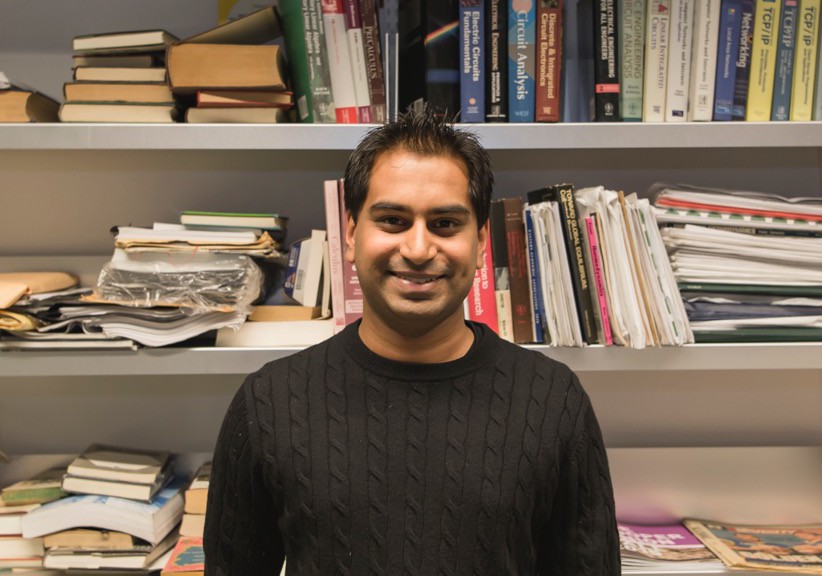 Where are you originally from?

My parents are from India, but I grew up all over the place because my dad used to work for the UN. I was actually born in Africa and I lived in a few African countries. I lived in Switzerland for a while, as well as Japan and London. I ended up in high school over here and have been in New York ever since.

What did you do before coming to Cooper Union?

I went to high school in Westchester County, came here for undergrad, graduated in 2010, and just stayed in the city since then.

What brought you to Cooper Union as an undergraduate?

Actually, Cooper was not on my radar at all when I was applying for colleges. My guidance counselor knew somebody here who was part of the administration, so he suggested that it would be a good fit for me based on my personality. I also wanted to stay close to home because my parents were in New York at the time. Plus, it’s hard to beat living in New York City.

I think one of the main things that attracted me here was the fact it was a small school and I had the impression after visiting a few times that I would get a lot of attention here. The school was academically rigorous and had a very good reputation, and I’d be able to make relationships with professors, which was very important to me.

Did your experience here as a student affect your decision to come back as an instructor?

No, actually, coming back to teach here was definitely not in my mind at all, it was just a funny coincidence. But I mean, I definitely have fond memories of this place. I think I grew a lot as a person. Just being around very bright people brought a healthy challenge. Though I attended what one would call a good, competitive high school, coming here was a different ball game. I think that really pushed me both academically, but also as a person — just learning to interact with other smart people made me much wiser and much more mature. That was very helpful.

At what point did you decide you wanted to focus on studying mathematics?

I always kind of liked math and I was very fortunate that I had really good math teachers. That really helped me develop because they were all really passionate about what they taught and that kind of rubbed off on me as well. I was pretty good at it, so I thought maybe I’d try to pursue this thing even further.

Do you think that the influence of a good teacher helps develop a student’s interest in a subject?

Absolutely! I mean, I definitely had some natural talent, but I wouldn’t say that I was exceptional. I was a pretty average student, but I really had good teachers and they really pushed me and made me better, so I think that’s how I fell in love with the subject.

How would you describe your current role at Cooper?

I consider myself a support person in the math department, so I teach some of the required courses here, like Differential Equations or Linear Algebra. I came here because Om Agrawal, Chair of the Mathematics Department, knew that I was doing my PhD in the city, so he asked me if I would come and fill in and I ended up staying ever since. I’m not a full professor or anything, but it’s definitely a pleasure to be back here. It’s very different to be on the other side.

How has the experience been so far?

Mostly good. The great thing about this place is the students, right? You obviously have students who push your buttons a bit or don’t work as hard as they could, but those students exist at all schools. Working with the kind of kids that come here — I wouldn’t trade that for anything, it’s wonderful. That’s what makes Cooper, Cooper.

I used to teach at City College and Mercy College as an adjunct, but the atmosphere here is very different. I don’t mean to badmouth them in any way, it’s a lot more rigorous here in a good way. The students push the instructors, and the instructors push the students. I think there’s a good relationship dynamic that exists here.

Teaching here is a big learning experience for me because the students are so strong that I feel like I’m learning more than they are sometimes. They ask such good questions and I really have to think about what I’m saying. As a mathematician, being able to really understand the details and explain it to somebody is a good skill to have. The teaching is not just a part-time job, it’s almost like a part of the learning experience in addition to my PhD.

And of course, I have to say that the faculty, especially in the math department, is really top-notch here. They are wonderful mathematicians, and wonderful human beings as well. It’s really nice to interact with them when I’m not inside the classroom. That’s a big plus.

Outside of the classroom, what do you like to do for fun?

Ever since I was a kid, I’ve played a lot of piano and organ. I like classical piano and jazz piano. I spend quite a bit of time during the week practicing and I play at my church on Sundays too.

I am also a big soccer fan. When I was at Cooper, I played on the soccer team and I play for a team in Queens now, so that keeps me a little bit in shape.

I also like to read a variety of things, especially theology. It’s something very different from math. In high school, I always enjoyed writing. It’s funny, I never won any awards for math or anything like that, but I got a lot of academic awards for English, so I like reading and writing a lot. And of course, I enjoy spending time with family.

Last question: do you have any advice for Cooper students?

Firstly, make sure to enjoy it because it goes by so quickly. There are so many times I look back and wish I could just do it again because I think undergrad is the best years of your life. Definite-ly build relationships and get to know people. Some of my best friends today are from Cooper and even though we’re kind of spread out, we still talk every week.

I’d also say to push yourself, but don’t go too crazy. While I was here, I wish I took fewer credits and just really focused on my major. Early on, I was taking so many classes. Even though I learned a lot, I think I was spreading myself too thin. By my senior year however, I concentrated a lot more on math.

All in all, I would say to just be yourself. I think this place imposes a kind of pressure that forces students to be someone that they’re not. You always feel like you should compare yourself to somebody else or achieve certain levels of academic success, so it’s important to not get sucked into that. Be content with your own abilities and do the best that you can.

One thought on “Faces of Cooper: Professor Michael Kumaresan”