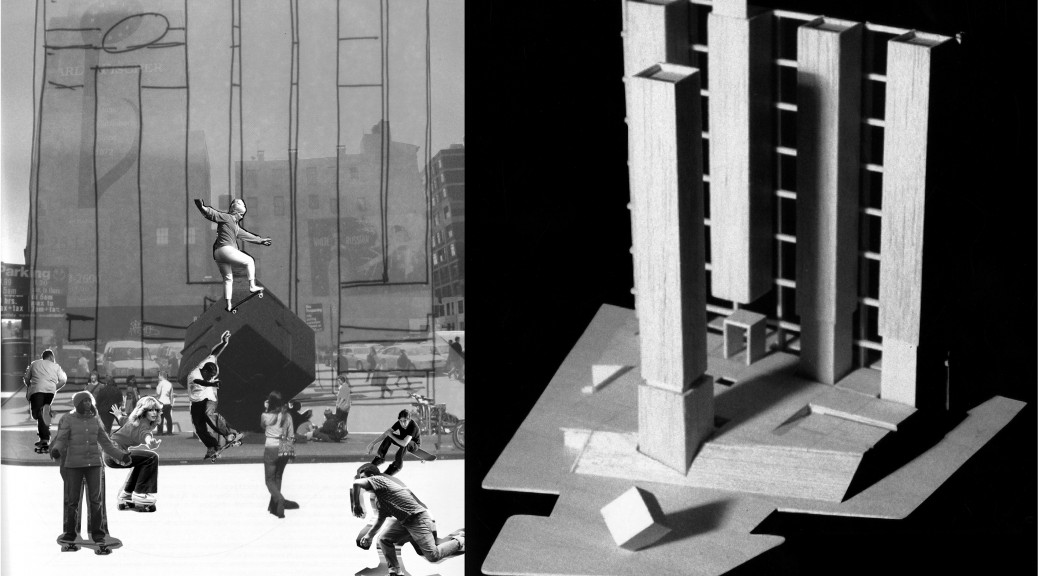 Above collage and model by architect Diane Lewis found in her 2007 book Inside-out: Architecture New York City published by Charta Books. The image on the left has been altered by the author.

As a preface, I want to note the hyperactivity of the oversized urban characters of Astor place. Specifically, the boxing of Peter Cooper, the disappearance and reappearance of The Cube, the inflation of the Koons’ ballon dog, the running of Haring’s green man, the spinning blue wall of bikes and the resurrection of Hejduk’s Suicide Houses. As interior and exterior, Astor Place is an urban theater operating on a few scales: We find ourselves at a possible intermission of an urban drama written centuries ago.

For now, we turn our archi-skate gaze to find the original Astor Place show person: the Alamo, the Astor Place Cube, or just The Cube. Intended to be temporary, the 1967 public sculpture by artist Tony Rosenthal has become permanent. Hear that House of Suicide. Temporary gone permanent.

This 4D urban compass once spun up its own gravity waves from an autonomous traffic island lined in New York City steel curbs. The island attracted skateboarders from all over the world every Sunday morning for a church-like skate session called Slappy Sundays. It offered a low-impact, curb riding skate style, fitting for young and old alike.

The recent renovation of Astor Place into a large sidewalk like plaza places the Alamo within reach of the blue-glass-luxury-condo-Chase-Bank-shoebox-base like building and in triangulated association with the sculptures resembling a big red dog and a large green man. I remember my Mom saying something like, “you are who you hang around with”. What was once a symbol of collective draw has become another ornament of corporate developmental architecture. I offer the dark reading that the Alamo has become a 3D Chase Bank logo. Seriously, when read as an architectural plan the Chase bank logo is a spinning cube.

I’ll halt my banter against contemporaneity and shine light on a proposed project for Astor Place by Cooper alumna and faculty member Diane Lewis—the sexual anarchist of architecture, if I dare say. Complete details of the project can be found in her 2007 book Inside-out: Architecture New York City published by Charta Books. Instead of seeing the current “sculpture for living” sitting on top of the Chase Bank, we can meditate on the four slender towers containing Cooper art and architecture studio space, resting on an elevated public Noguchi sculpture park, with a ground-level revenue-generating parking lot kind of project that still one day might be. ◊