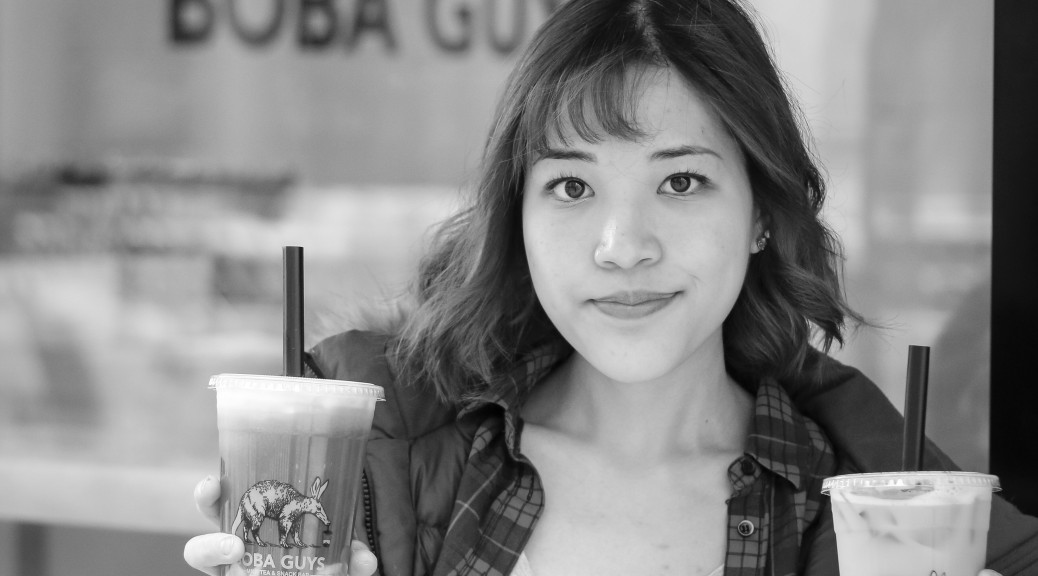 Chewy, round black balls with hot or cold drinks. Thick Straws. Boba was first invented in the 80s in a restaurant called “chun- shuiˇ tangˊ” in Taiwan. Coming from the west coast, the word “boba” is more familiar and correct to me than “bubble” tea or even “pearl” milk tea. My Taiwanese friends tell me, however, that all three names are perfectly acceptable. “Pearl” milk tea is the literal meaning of “bubble” tea, “bubble” tea has pretty old usage, and “boba” is a slang that translates to “big boobs” because the drink was advertised by an actress in Hong Kong with large breasts.

Most of the shops here in NYC called these drinks with the drink name + “tapioca” which I wasn’t really used to ordering because I always ordered “boba.” That’s when I heard about “Boba Guys,” a San Francisco based local shop founded by two friends, coming to East Village. I knew there was one in Clinton Street, but it was too far and I never really had the chance to go after visiting their second pop-up at Tea People at the Lower Manhattan HQ (LMHQ) back in October 2015. I instantly fell in love with Boba Guys then despite their limited menu of 3 drinks, as their tapioca was chewy and their drinks were just perfect. Every time I went and ordered a drink with tapioca in one of the abundant shops near Cooper, I craved and missed Boba Guys’ perfect drink.

The founders, Bin and Andrew, were two friends who worked together at the bag company Timbuk2 and started Boba Guys as a pop-up shop with Ken Ken Ramen, a shop in San Francisco. Now Boba Guys has five locations in San Francisco and two locations in New York, and plans to expand to different locations are underway. Their goal and motto is “next level quality,” as they brew only real tea with tea leaves, use locally sourced milk (Straus Family Creamery in San Francisco, Battenkill Valley Creamery in New York City) and use house made syrups and add-ins such as almond pudding and grass jelly.

Now, they have various drinks that include rose milk tea (my favorite) to strawberry matcha milk tea, with FREE dairy-free options (FINALLY a company that understands that those of us who are lactose-intolerant are already tortured by the fact that we can’t have milk) and add-ins. They also sell bento boxes and small bites from the Japanese restaurant “Bessou,” and you can also buy mason jars with their logo and use it for a discount every time. Protip: you can ask for two different add-ins for the price of one and ask for different ice and sweetness levels.

One downfall is that their drinks ARE pretty expensive (they range from $5-8 depending on size, add-ins, drinks) which is understandable because of their high quality ingredients and prime locations in NYC and SF. Nonetheless, this place is constantly packed with long-lines, and I have been impressed by every single new drink I’ve tried here. I look forward to trying all of their new drinks, and I hope you have a chance to treat yourself to some of the “highest quality bubble milk tea in the world.” ◊