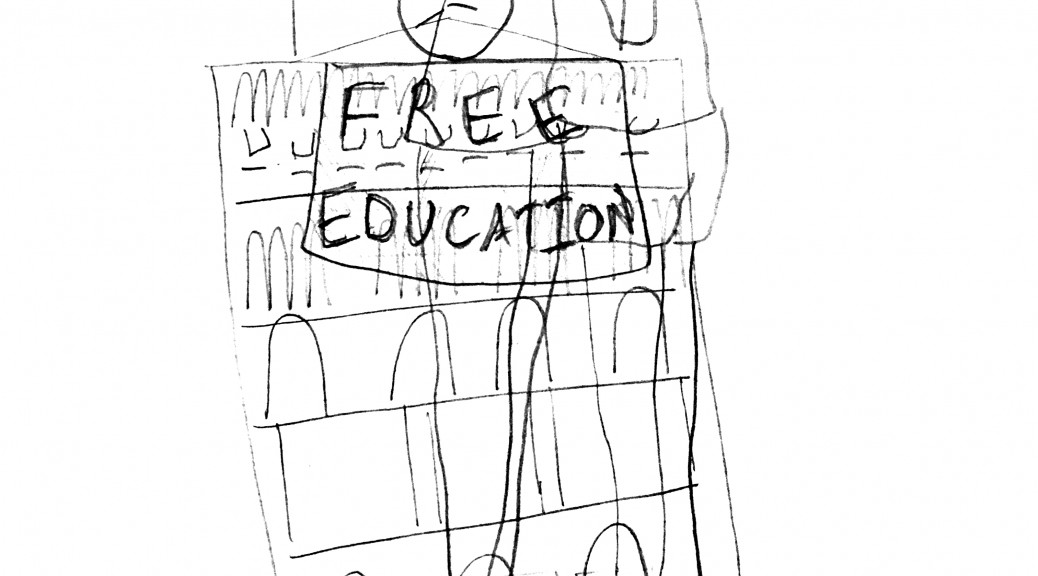 When I found out, I was in a world history class with freshmen and sophomores (I was making up a credit to graduate). I was checking my phone every ten minutes and finally it came. The minute I saw it, I no longer saw it because I was crying. My teacher asked me if I was okay and a girl across from me gaped, figuring it out, “oh my God she got in.” I picked up my bag and ran out of the classroom and across campus to the visual arts building, rushing into the director’s office, heaving with salt water, “I did it!” She hugged me with a mother’s embrace, and a sense of fulfillment ensued for the last month of high school.

It is the experience of education without financial consequence, revealing a desire for knowledge and freedom you’d never realized you’d needed before.

When I arrived, I was in a gold mini skirt with black tights and a black ruffled top. I only knew two upperclassmen, both of whom had been my TAs at a summer camp a few years before. When I arrived, one of them was perched on the stoop of the Foundation Building with their friends all around them. Upon seeing each other, we excitedly hugged, and I could smell their body sweat as I saw their armpits unshaven in a black muscle tank. Their hair was cut to the cheekbone. They were beautiful and unlike bodies I had hugged before. I went home and changed my clothes: jean shorts, sneakers, and a striped t-shirt from the boys section of a vintage store. I felt excited and alone. I put on the bright red lipstick that my best friend from boarding school gave me before we parted, and went to my first class feeling hot as fuck, legs criss-cross-apple-sauce while Dennis Adams lectured for four hours. We went around and said our names, where we were from, who our favorite artists at the moment were. In my outfit I was confident: “I’m Emma, I’m from a boarding school in Michigan, I’m into Laurel Nakadate and Isamu Noguchi’s set pieces for Martha Graham.” He told me I would like his class.

I would start putting more effort into my classes, my peers, my teachers, the people in the school who were not the institution but my partners in education.

The majority of my first semester was spent at BHQFU, going to parties, and spending the entire day before my drawing and 2D class locked in the dorm with my roommates, finishing the assignments. During this time, countless—truly countless—conversations were held with my peers, discussing how we felt about the institution we barely knew, given it’s current political climate. I started out quite active, going to all of the Free Cooper meetings, spray painting over Banksy outside of the NAB, glaring at the Fishhouse, wishing Jamshed wasn’t living there—until I made a decision: Since the administration was not in support of the utopia I craved, I would not put my effort into it. I would start putting more effort into my classes, my peers, my teachers, the people in the school who were not the institution but my partners in education.

On the night of that decision, I, in dramatic freshmen fashion, decided to cut an entire ream of hot pink paper into hearts. Around ten on a Friday night I stuffed them in my bag and, not knowing where the security cameras were, proceeded to toss the cut-outs down all of the stairwells with a pounding heart. I came home with adrenaline pulsing in me; the only feeling I was capable of was infatuation with the idea of loving something that no longer existed: The invention of Cooper I had conceived of before I came.

Everyone at this school has their story for, ‘where were you when you got in?’ but I think a more revealing question for recent years has become, ‘what do you think you just got into?’ A free education? A half-off education? A community of like-minded people? A community of ‘genius?’ An institution that will grant you financial security after graduation?

I thought that getting into Cooper would mean that I was better than everyone else and that it would always stay that way––meaning, after I graduated I would have no trouble getting jobs or residencies because having Cooper Union on your resume was the Golden Ticket of the world. As someone who is about to graduate, I can assure you, none of that is the case. Cooper is not a free pass to life, it is the opportunity to try. It is free studio space, the grouping of bodies in critiques, the stairs for smokers, the green room with a piano and safety to yell, the stage with its histories and ghosts, the chance for an exhibition, the lobby for having parties, the couch for naps, the communal sketchbook, the neon stairwells, the candy in the library, the professorial offices for chatting, crying, and drinking wine.

It is the arms of someone you barely know, revealing a desire for a kind of being you’d never realized you could be before.

It is the experience of education without financial consequence, revealing a desire for knowledge and freedom you’d never realized you’d needed before.

When the person I initially hugged had their senior show, I signed their book with something along the lines of, “Thank you for continually teaching me.” After this I purposefully contorted my initials so that they would not know who had written it. I was embarrassed at having not known and at having learned. But, as I leave, sentimental, introspective, curious and scared as ever, I no longer share this timid repose. I whole heartedly sign off to the person hugged, to the peers and teachers who have supported me, to the idea and actuality of free education, to The Cooper Union: Thank you for continually teaching me. ◊