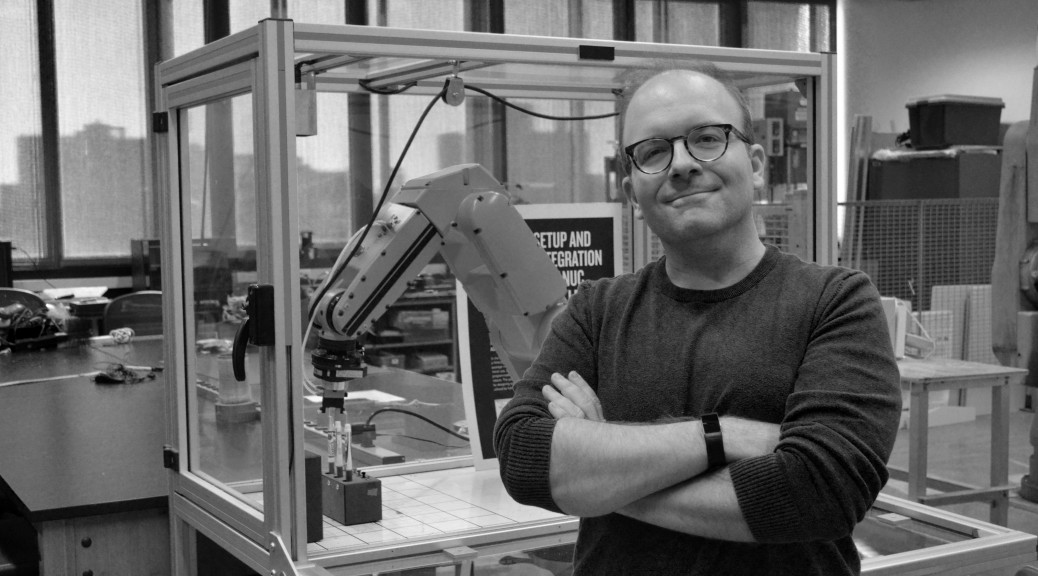 Doug is the lab manager for the mechanical engineering labs on the seventh floor of the NAB. His role involves helping students with the more practical side of their courses, like fabricating things for ME-211 Design & Prototyping and assisting lab work for ME-352 Process Control.

When did you move to New York City? How did you join Cooper Union?

I first came here to join my fiancée (and now wife), who moved here to get her Master’s degree in theology and the arts.

My first job when I moved here was for a NASA project. I built a robot that tests glass to be used in a scientific satellite that’s still operational in orbit today.

While I’ve lived here, I’ve also worked various other jobs: in labs at Columbia, at New York Designs (a startup incubator), and also at CUNY.

I first heard about Cooper from my work with an alumnus, Robert Stark (ME ‘80). Yeah, I know there are the immediate references to Game of Thrones (Robb Stark) and Ironman (Stark Industries). Anyways, Bob was the lab manager at Columbia University’s mechanical engineering department and I worked with him there. He spoke so highly of Cooper all the time.

Other schools are heavy in theory, but when it comes to picking up hand tools and learning how to make something—that doesn’t really happen at other places.

Once I learned more about Cooper, what drew me here is the richness of the practical side of engineering education. Other schools are heavy in theory, but when it comes to picking up hand tools and learning how to make something—that doesn’t really happen at other places. Plus, it’s amazing that undergraduates are deeply involved in academic research at Cooper. At other schools, you are fighting tooth and nail to maybe get on a research team, whereas here you’re actually doing the research one-on-one with the professor.

I didn’t know that. This is the only undergraduate experience I’ve ever had, so I don’t know how things are at other places.

I know! I’ve had to remind students that sometimes. At some other schools, you’re just getting theory and the benefit of the famous name of the college, but here you will benefit from the skills that will actually help you day-to-day in your future jobs.

How did you meet your wife?

I met her when we both worked in science outreach at the University of Florida. The program, Science Quest, was a pre-college STEM summer camp, and we were both counselors for three years in a row. During my last summer there, we met and then within two-and-a-half months we were engaged.

“I really like Doug and Doug really likes me. We kinda want to spend the rest of our lives together. Are we engaged?”

The actual decision to get engaged was the most unromantic thing ever. She was here in New York already and I was still in Florida. We had made a decision that I would move to New York and we were on the phone one day talking about the logistics. I asked if we could consider living together and she said that her mom was kinda traditional and that she wouldn’t go for it. We started looking for a way to say, “we’re in this for the long term,” so that her mom would be okay with us living together. Towards the end of this conversation, I say “I think we’re um… engaged?” so she goes and asks her roommates that she’s known about a week. She says to them: “I really like Doug and Doug really likes me. We kinda want to spend the rest of our lives together. Are we engaged?” And, so, it turned out that we were going to spend the rest of our lives together.

You mentioned a NASA project. What was it?

It’s a satellite called NuSTAR, which stands for Nuclear Spectroscopic Telescope Array. It’s an X-ray telescope that does black hole surveys, including looking at supermassive black holes. It’s also looked at hard X-rays directly from the sun, too.

It was the first space telescope of its kind and it looks kinda funky. There’s a pair of lenses on one end and a thin, 10-meter-long mast connecting the lenses to the scientific instrumentation on the other end. Each lens is about the size of a metal trash can and they are kinda like an onion skin in the sense that each lens consists of 160 layers of glass epoxied in place on graphite spacers. Each layer took about a day to cure, so just putting it together took the better part of a year.

NuSTAR was launched on a Pegasus XL rocket from Kwajalein Atoll in the middle of the Pacific. What’s interesting about the Pegasus is that it launches by dropping from the belly of an airplane like a weapon and then kicks off into orbit by accelerating ahead of the plane. The launch happened in the middle of the night so that by the time it reaches orbit, it can unfurl its solar cell right as the sun is rising.

During the launch, all we could see was a video feed of the rocket attached to the bottom of the plane and another feed of mission control. It was especially tense for my team because the project had 10 years of development, including my job which was 4 years of scanning tens of thousands of pieces of glass for use in the telescope’s lens. It went on for what seemed like forever.

So the countdown starts and we’re watching and all we can see on the grainy, night-vision video feed is the rocket drop from the plane and then fall out of frame. And then, we could sorta see the belly of the aircraft light up very bright. We had no idea what to expect, I mean did it explode?! Then, we learn that it was just the first stage of the rocket kicking off. So we couldn’t even see it directly, we just saw the flash from the ignition on the bottom of the airplane.

Did you see the solar eclipse this year?

I wanted to go to Charleston, but unfortunately it turned out to be pretty expensive for my wife and I to go down there. We still made plans to see the eclipse from here in New York, but by the time our plans came together, all the eclipse glasses were sold out. So, I made my own glasses using the laser cutter here at Cooper. I got some solar film, which I had from my days as an astronomer, and mounted it between a couple of layers of birch plywood I lasercut. I attached this to a pair of binoculars and it worked very well. Our friends got together in Central Park and we made playlists with ‘Total Eclipse of the Heart’ and had space-themed food like my wife’s homemade moon pie. My friends and I like to do themed stuff for our get-togethers.

How did you start working on astronomy and satellites?

Well, it was a long road. It actually took me 15 years to finish my undergraduate degree, but I finally got my Bachelor’s degree in Astrophysics from Columbia University in 2013. That was a big year for me because it was actually the same year as the satellite was launched, and it was also the year I got married after being engaged for seven years.

Anyways, the reason it took me that long to get my degree was because I was working a job, sometimes two jobs, while going to school. And they were bad shifts, like midnight to 8am. But I was still always taking classes and I did whatever I could to keep the torch lit.

Do you have any plans to continue working on similar things?

I do! I actually moonlight right now on a project to make a high-altitude balloon experiment. It’s a collaborative effort between MIT and Columbia. The mission is to float a gondola around the South Pole to detect dark matter by looking at specific radiation given off by antimatter products of a particular reaction. My work is to help make the testing platform for the array of detectors. The difficulty is that the test platform also needs to simulate performance at very low temperatures and a high altitude above the Antarctic.

Do you have any advice for Cooper students?