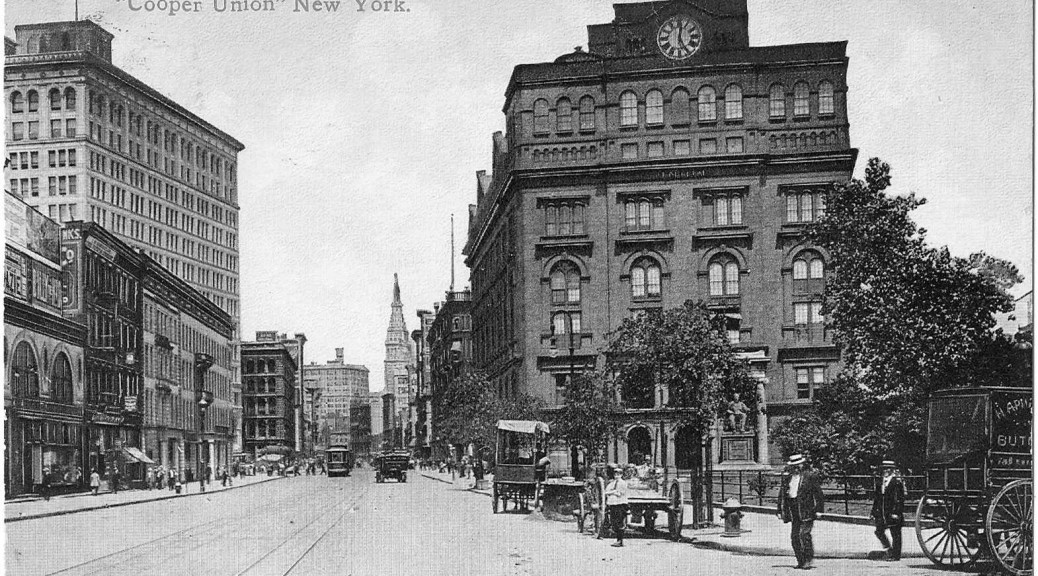 Photo source: groupaffect.files.wordpress.com. The Deed of Trust and the letter to the Board of Trustees can be found at library.coopr.edu.

On April 29, 1859, Peter Cooper and his wife, Sarah Cooper, bestowed upon The Cooper Union for the Advancement of Science and Art both the property and land that currently houses the Foundation Building. The Deed of Trust was followed by a personal letter that Peter Cooper wrote to the trustees of the institution. It was not until 97 years later, in 1956, that the letter was published in a pamphlet, to remind its readers of Peter Cooper’s vision for the institution.

Cooper is quick to point out that the entire basis for founding a new school was in the hope that “unnumbered youth [would] receive the inspiration of truth in all its native power and beauty”. Although the letter is meant to address the trustees, it speaks more about the mission statement for the institution, offers solutions to societal problems at the time, and touches on what Peter Cooper hoped the institution could achieve.

Throughout the letter, Peter Cooper writes of  his desire to inspire truth, encourage heroic virtues, and unite all in a common effort to elevate the human race. These desires indicate the importance of knowledge. In the earlier half of his letter, he writes that the professors and instructors at Cooper Union are of the “highest moral worth, talents and capacity.” He states how the mission of an exemplary professor is to communicate a knowledge of science in a welcoming manner. Interestingly, Cooper also mentions what to do with incompetent professors. He writes “it is my earnest desire that such professor…shall be promptly removed.”

Cooper’s letter also touches on solutions to societal problems at the time. Rather than simply state a desire to improve the lives of disenfranchised portions of society, Cooper offers concrete solutions. For instance, he states a need to apportion $250 yearly (over $7,000 today) to support students at the Female School of Design. He also writes “In order to better [their] condition… I desire the trustees to appropriate out of the rents of the building fifteen hundred dollars annually towards meeting the expenses of said school.” It is important to remember that Cooper, in a letter for a limited audience accompanying the Deed of Trust, offers unexpected solutions to the injustices, such as unequal representation, that women faced in the mid-19th century. Rather than just talk about the aspirations of the school, he offers actual solutions.

Although the latter half of Cooper’s letter to the trustees grows increasingly religious, he concludes his letter with a rather secular message: that knowledge will cover the earth. Although he does state that the institution should help guide the youth away from the dangers that they are perpetually exposed to, he also states that goodness must come from within. At the end of the letter rests his signature, marking the beginning of the Cooper Union’s existence. The question that remains, however, is how have we lived up to Peter Cooper’s expectations? ◊