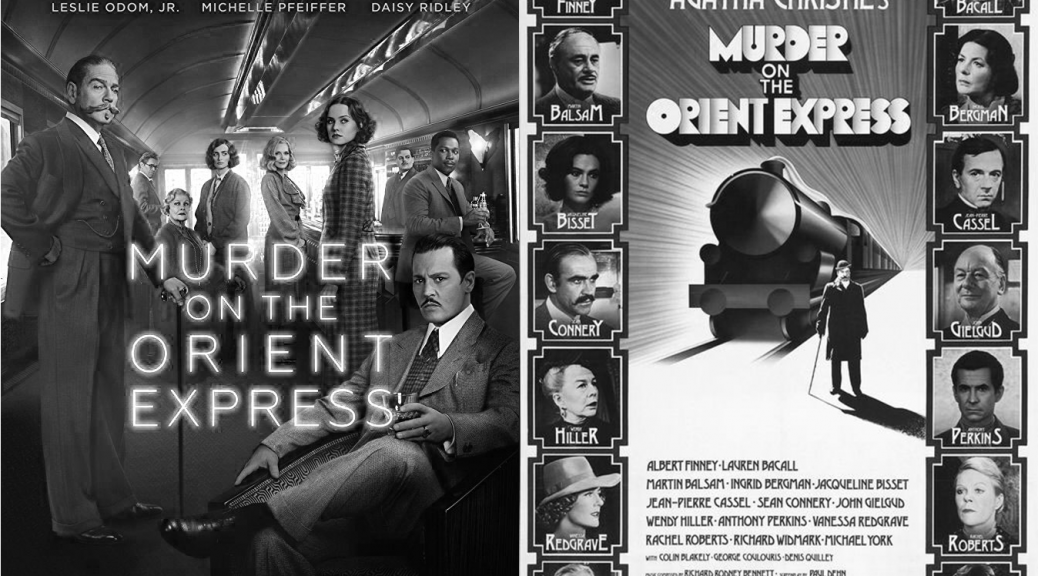 THEN (1974)
Murder on the Orient Express (1974) is about the passengers on a train headed across the Eurasian country. On board is Hercule Poirot (Albert Finney), a Belgian detective who is traveling with his friend who owns the train line. When one of the passengers asks for Poirot’s protection, Poirot declines out of a lack of interest. But the passenger ends up dead the next morning so Poirot must deduce who among the crew’s many characters was the killer.

The mystery of this film is very well executed and took some truly genius writing to pull off given all of the characters. Unfortunately, you really have to wait a long time for the film to actually get to the murder. There are so many characters that it’s difficult to really know where the story is going until the murder takes place. Once that is done, this film is captivating all the way to the end. The way the writers control information is fantastic, and the film’s confined location helps keep things tidy and neat. The film feels very theatrical and would make for a good play. It was no surprise for me to then learn that it’s based on a famous novel. Without spoiling anything, the film comes up with a genius way to tie everything together such that all of the information that has been presented is used in the conclusion of the story. I genuinely did not see the ending coming and was very impressed once all had been revealed.

Part of this film’s claim to fame is its all-star cast. I’ve mentioned Albert Finney, but this film also stars Lauren Bacall, Ingrid Bergman, Sean Connery, Vanessa Redgrave, and Anthony Perkins, among others. They help keep the film from being confusing by giving each character a unique personality. Even with over a dozen characters, the film is pretty coherent because of how easy it is to tell each character apart. The characters give fantastic performances in their small parts and help make the film memorable.

Overall, I found this film slow at the beginning but captivating once it takes off. The way this film meticulously ties everything together is so brilliant and makes you want to watch the film a second time just to catch all of the clues. As I said, the film does take a little while to get going, but stick with it and you won’t be disappointed. ◊

NOW (2017)
Murder on the Orient Express (2017) is the remake of the popular 1974 film adaptation of Agatha Christie’s book of the same name. The story is the same: Hercule Poirot (Kenneth Branagh) must solve a murder mystery when his train is stuck due to bad weather and a man is murdered in the night.

In the 1974 version, you really had no idea what was going on until the end; it was incredibly difficult to piece everything together by yourself even though all of the information that is eventually used in the end to solve the mystery is available to you. Hercule Poirot figures out the mystery by getting evidence from, not what the suspects say, but how they say it. Even though you didn’t really know the answer to the puzzle, the film kept you engaged by all of the terrific performances and the fantastic writing.

In this version, the answer is so much easier to figure out since the mystery is so much simpler. There is a lot of sloppiness about the clues and evidence in this film. Things are said in this film that completely give away the ending. The conclusion is so much more predictable that you’re waiting for Hercule Poirot to catch up to you, not the other way around. What keeps it entertaining (because the mystery isn’t really that great this time) is the lead performance from Kenneth Branagh (who also directs) as Hercule Poirot. He seems to be having a fantastic time in the role and you can’t keep your eyes off him.

Unfortunately, there are more problems with the film, particularly in its ending. This film has an incredibly over-acted and over-dramatic ending that is just annoying to watch. The drama serves no purpose at all and almost undermines the film’s ultimate story. There are even action scenes in the film. Why did this film need those? I just feel like the movie was over-dramatized without need. Whenever a remake comes out, I have to ask if it has any purpose. This film adds a fun scene at the beginning that I liked. And the production looks very sleek and modern. But apart from that, the old-fashioned story was better the way it was in the 1974 version, which was just better written. If you like old-fashioned mysteries, this will probably appeal to you. But I would definitely recommend checking out the 1974 version first. ◊