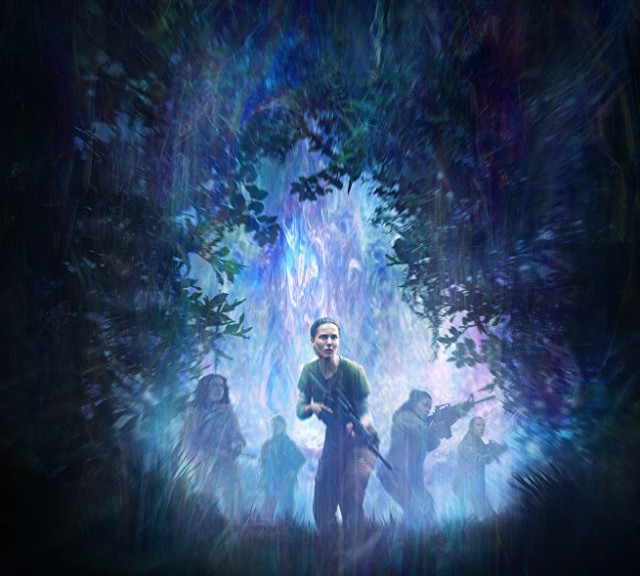 Annihilation is about Lena (Natalie Portman), a biologist on a mission to investigate a strange phenomenon known as “the shimmer”. This shimmer started at a lighthouse and has been slowly growing, warping everything it consumes. Teams of military personnel have tried to go inside to find its source, but none have returned. Lena and four other scientists will be the first team of scientists to search for the lighthouse and investigate the source of this “shimmer.” Lena has another motive for going inside – her husband (Oscar Isaac) was on one of the military teams that never returned.

This is a strange film in that the premise and existence of this strange shimmer zone are really intriguing but the story’s execution is very simple and workmanlike. The actual shimmer itself and the production design and visual effects in the film are fantastic and beautiful, but the writing and directing were not given as much care. In a lot of ways, this is a typical jump-scare kind of horror film, full of gore and the usual types of scares, even though the premise is very psychologically thrilling in nature. There were a lot of squirms in my theater when the gory scenes were on display and I was a little let down by how often the movie went that route to achieve its scares.

To make matters worse, the dialogue and characters in the movie were also disappointing. The way the film portrays Lena sometimes contradicts itself, introducing plot-threads and characters that have no bearing on her character or the story as a whole. Given that this a slow-burning science fiction movie with a runtime under two hours, writer/director Alex Garland could have spent a little more time tying things together to make the narrative more seamless.

That brings me to the ending of this film, which I won’t spoil. All I can say is that it is interesting but underwhelming because, just when there are a lot of plotlines that you expect to be tied into the main story and just when you’re excited for the story to conclude, it just ends. Storylines are unresolved, characters make strange choices, and you walk out of the experience feeling unresolved and underwhelmed. This is not a criticism of science fiction movies with ambiguous endings, of course. If done properly, some of the elements I disliked in this film can work beautifully. But here, they don’t feel right. As I did some more research and learned that this was based on a book, some of this started to make sense. It might be that some of these plotlines were featured in the book and were just included in the film for accuracy’s sake; unfortunately, the pieces of the story that would tie it all together feel missing.

Overall, I was disappointed by this movie. Its horror elements can make for a suspenseful experience and the visuals are fantastic, but the storytelling and writing are poor. The ending is a little frustrating and you will be left with questions regarding why some parts of the story are there to begin with.