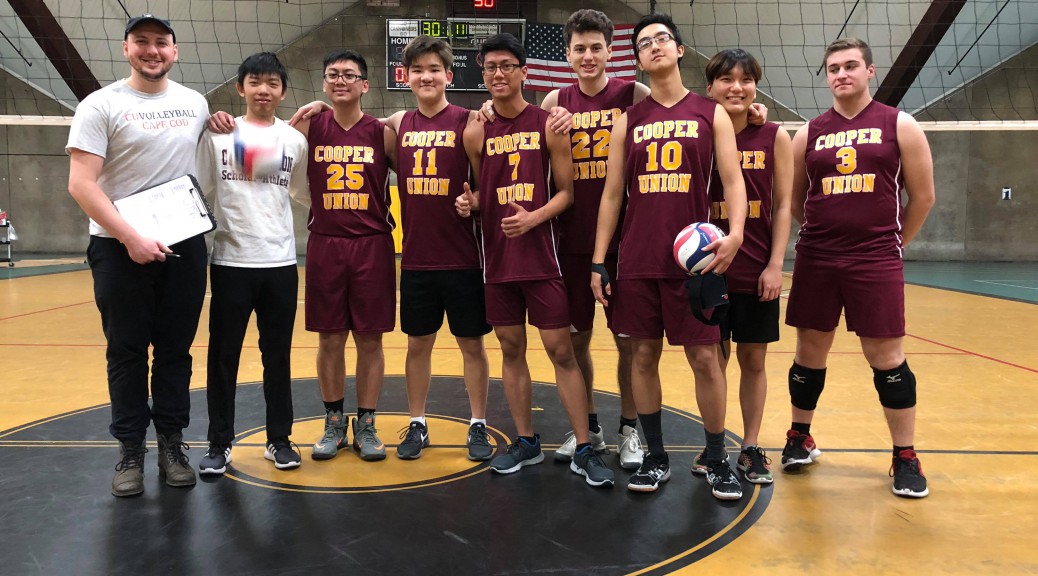 Most of our team was comprised of innocent young freshmen playing their first college volleyball game. Fifty minutes before the game, both teams warm up. This is where you prepare yourself mentally for the game and observe the other team, spotting weaknesses and strengths. Pratt’s players are tall, and their star player “Number Four” has improved even more, adding a jump float serve to his repertoire. “We must block him at all costs, don’t worry so much about the other players,” our coach, Sergey, tells us. Warm-up is over, time for the national anthem, and then the players shake hands.

The first set is an utter disaster. We fumble the simplest of balls, there is no communication between us, and our positioning is static. Before I know it, we’re down seven points and the game has barely even started. Our coach calls a timeout to slow the bleeding. The set is lost already but momentum is everything, all that matters now is to get some good combinations so we can end the set on a high note. We lose the set by an embarrassing 10 points, but we managed to get a couple of good plays at the end, which stirred the young players.

In the two-minute break between sets we gather in a circle. Coach points to the positives: “I saw some good combinations at the end, let’s keep that up.” He fleshes out some technicalities we need to improve upon. But if sport teaches you anything, it’s that psychology can sometimes be more important than anything else. It was obvious the freshmen felt a little scared — it was their first game, after all — and the first set had left much to be desired. After both Sergey and our captain, Chris E., were done talking, they asked me if I wanted to add anything before the start of the second set. I said the first thing that came to my mind: “Relax guys, relax. I know you’re nervous and uptight, but they’re just as nervous as we are. Relax, loosen up, but concentrate on every single point.”

In the second set we immediately go down a couple of points. In those cases I avert my eyes from the giant scoreboard displaying just how much we stink right now. “They’re just numbers,” I think to myself. Finally we gain a tiny bit of momentum with a couple of powerful serves and sneaky plays at the front. Our focus is better but we’re still trailing by a few points. A few slip-ups by Pratt allow us to get a slight lead in the set after trailing for the whole game. But the advantage is ever so slim and the end of the set is approaching; a mistake here can cost the set and basically the match.

Clutch moments determine the outcome of the game; it’s where nerves are pushed to their breaking point, and the thrill makes you feel alive. We win the second set with the slenderest of margins, 26-24!

“Yay, hurray, we did it, we won the set, we can beat them!” That sort of attitude has cost us all our prior games with Pratt. We would win a set or two, and think that the game would just finish by itself. No! We’re tied, the momentum is slightly on our side simply because we won the last set, but we haven’t won anything yet. Chris E. warns us: “We stole that set from them, and they’re pissed. Keep focused because they’re gonna come back for vengeance! Cooper on three!” “One, two, three… COOPER!!!” we all shout.

Now, the third set begins. We get off to a good start, which frees us up in our game. Pratt gets a clean ball to their setter. “Number Four” prepares his run on our right wing. The set is clean and “Number Four” unleashes on our block which sends it straight down on their field. Gian, the skinny freshman, blocked the unblockable “Number Four.” The tides have definitely turned. The momentum is on our side and so is the third set with a clean 25-22.

The Pratt beast is weak and confused. It’s time to put salt on the wounds and deliver the knockout punch. In the fourth set we play with confidence and build a significant lead. But right when we hit the 20-point mark, it seems as though an invisible force is making the points harder and harder to win, as if we’re carrying a rock on the top of the mountain, like Sisyphus, and have reached the steepest and most treacherous part. If we lose the momentum that rock will tumble back all the way down, leading us down as well. Pratt gets us in an uncomfortable rotation and cuts our big advantage to 1 point: 23-22. Sergey calls a time out. “All right guys, catch your breath. Win one more point and we have match points.”

We win the next point in a scramble and get out of the uncomfortable rotation: 24-22 and two match points. Pratt gets a clean hit from “Number Four”: 24-23. The nerves are sky-high, one more measly point and it’s over, please please. But the drama isn’t over. We get a decent pass to the setter and then try something fancy but don’t quite make it: 24-24. Sergey calls another time out. “All right guys. One last push! They want it bad, but we want it even more! Show them how much we want it! COOPER ON THREE. ONE, TWO, THREE COOOOOOPER!!!”

They serve, the ball comes flying by, a good pass to Jason, our setter, who sets it to me in the middle. I see Pratt’s block rise, a 6’7” guy stretching as much as he can. Instinctively I fake the shot and tip the ball softly over the giant, knowing that his height also makes him less agile for these kinds of shots. 25-24 and match point for us. It’s my turn to serve. I give the ball a kiss for good luck. The serve goes over to their side and, after three passes, we all stare at the ball coming back to my serving side. I follow the ball as it lands outside the court. 26-24, point, set and match!

Wow, I really did not think we were capable of winning against Pratt. I remember the bitter conversation I had with Calvin Liu, a senior last year, when we lost to them: “Why do you think we lost?” he asked me. “It’s a mental game. We had all the cards to crush them. We just didn’t want it badly enough.”

Now I felt like, with these freshmen, the fire and will to win was there.