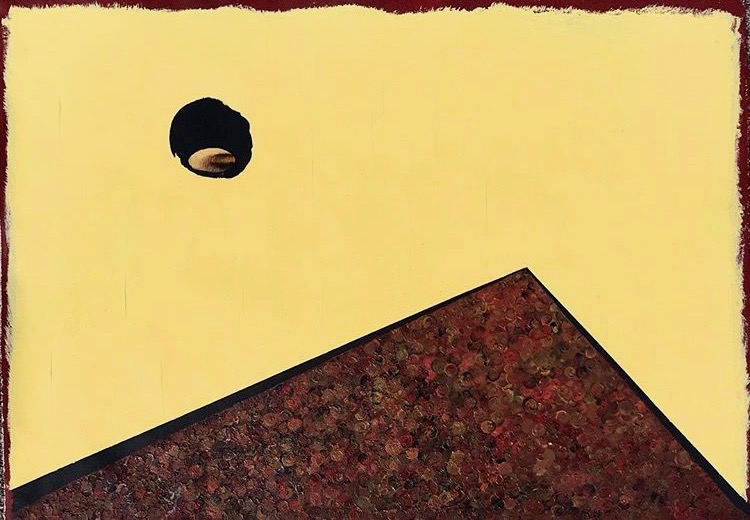 Azure, lapis, cobalt, Phthalocyanine Blue BN– “This color is also present in Lidl’s Dentalux Total Care Plus toothpaste, listed as the final ingredient.” Farizandi’s Cobalt has a brilliance close to International Klein Blue, but its hue morphs and varies in value, deeper and older– older in that it looks like a blue you remember and not a blue that is before your eyes. The blue is rich and vast and flat, but flat only until your eyes travel to the top right, to the black and (avian) orange at a 30-degree angle. The angle inverts the way you see the entire painting. Suddenly, the blue takes shape and forms an urban space of corners of buildings and too many small apartments jammed into former tenement buildings. Like the product of 3D glasses in a movie theater, the single perspectival slant transforms what is understood as a flat surface into an illusion of deep space with only a pair of black dots, like Mizar and Alcor, anchoring your eyes and keeping them from rising off the top and out of the frame, along with the rest of the shapes… Cobalt is a theatrical stage on which you can apprehend the near naturalistic renditions of light, color, and space taking shape before your eyes. 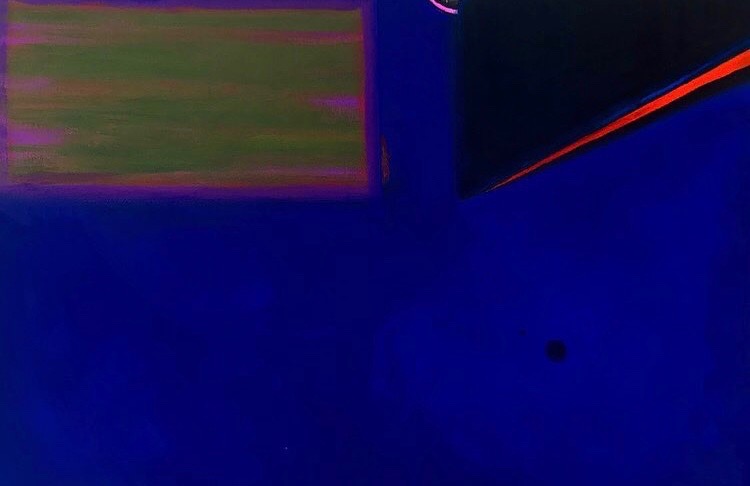 With no figurative elements or central forms as a means to an end, the color becomes a means towards a new space-light. In Art and Space, Heidegger wondered if space was that “homogeneous expanse, not distinguished at any of its possible places, equivalent toward each direction, but not perceptible with the senses.” But Cobalt is perceived space, it is enclosed, it is claustrophobic, it is a room– a room that you know. Gaston Bachelard, the philosopher, wrote in his book The Poetics of Space that “the places in which we have experienced day dreaming reconstitute themselves in a new daydream, and it is because our memories of former dwelling-places are relived as day-dreams that these dwelling-places of the past remain in us for all the time.” Once again, Cobalt intertwines with Klein; it was Bachelard, in fact, who inspired Klein’s own blue voids. Cobalt remains a space to occupy: a space to be enveloped in and overwhelmed by its merging shapes/colors. Those admixed, indistinguishable edges are where all the energy is poured into the painting. The hazy muddle of two colors over each other (fuchsia and Reseda green) create frenetic energy, in a blurry-vibrating-edged/filmy-textural-haze-Rothko-and-Frankenthaler sort of way. As you struggle to focus on them, the blue background scrolls upward and outward, ever-expanding. Cobalt is flat and exists only in the frame of the painting. Cobalt is a sealed-off interior. Cobalt is engulfing limitlessness.

John Berger: “The yellowest thing I can think of is saffron, which is both a stain and a taste. Yet– and this is part of the thrill– the saffron yellow comes out of a red. The little red fibers when moistened stain yellow!” Nausea is royal yellow/mellow yellow/Crayola yellow… the yellow of sunlit rooms. Kandinsky said yellow was a triangle, Klee said yellow was round like an egg yolk. This yellow is a flat rectangle: walls become the corner of a room where the Theodoros Stamos mottled paint triangle comes to a point. It has the spatial tension found in all paintings that are confined to the surface.

Nausea exists both as an illusion of deep, bell jar, oxygen-less still space and simply as paint across a surface (its obvious brush marks are evidence of the act of painting), skirting the edge but never going past it. “The aim of art is to create space– space that is not compromised by decoration or illustration, space within which the subjects of painting can live” (Frank Stella in Working Space). In Matisse’s flat, color-blocked rooms images of chairs and tables and bouquets of flowers delineate the distances, while the illusion of depth in Nausea is defined (with only a surreal hint of a face/swirling-paint-circle as interference) by a mere plane of color. A plane of color that both reinforces Modernist medium specificity’s insistence on flatness and acts as a windowed picture into a perspectival box. Stella goes on to say that “abstraction gains its freedom, its unfettered expandability, its own working space, by eluding the spatial dictates of the real and ideal image.” I would argue that Nausea and Cobalt gain their power in their ability to exist simultaneously in the nonfigurative, color field realm of Rothko and in the world of Vuillard: in the hauntingly familiar.