As the second semester starts to become overwhelming, some of the sports are coming to the end of their season while others are about to start. The women’s basketball team played Pratt Institute in the beginning of February. Even though it was a tough game, they never gave up and everyone was determined to do their best. The men’s basketball team also played Pratt Institute right after the women’s team. Although it was another tough game, the men’s team gave more than 100% and won the game, making the last point in the last couple of minutes of the game. END_OF_DOCUMENT_TOKEN_TO_BE_REPLACED

At 3 in the morning on Sunday, January 12th, a hundred people gathered in the lobby of 41 Cooper Square. It was time for Dean Baker’s Annual Ski Trip, which has been going for 38 years. Cooper students and their friends are invited to go to Mont Sutton in Canada for five days, the week before the second semester begins. In Canada, the chalets are rented for groups ranging from four to ten people to live together. Every year, the trip has been an enjoyable one, where the bonds between old friends are strengthened and new friendships are created. What made this year special, in Dean Baker’s words, were the energy and participation of this year’s group. About 25 beginners attended Dean Baker’s ski school, where Dean Baker teaches anyone who is willing to learn how to ski. His patience, expertise in the topic, and the beginners’ determination are what made this year’s ski school very successful; everyone was able to ski down at least a beginner slope by the end of the week. Every night, there was an event going on and it was at these events that the group dynamic shone. Tuesday night was a dinner, dodge ball game, and party at the lodge at the base of the mountain. Throughout the party, students were joining together to play games in groups and as the night progressed, the groups unified into almost one huge group, getting everyone involved in the fun. Wednesday night was dedicated to Montreal. At the end of the night every year, the majority of the students could be found at the same local bar near the location of the bus pick up. Thursday night was another dinner at the lodge and a party at a nice hotel.For Dean Baker, the ski trip is the largest gathering of some of the most intelligent people, none of whom are in academic trouble. For those who couldn’t get enough of skiing in Canada, Dean Baker also hosts the Alumni Ski Trip during the President’s day weekend, where the undergraduate students are also encouraged to attend.

Of course, there were sports involved in the ski trip, not counting the doge ball game. The men and women’s basketball team played Lenoxville, a division 1 school, at Bishop Campus. The volleyball team played John Abbot, which is another top school in athletics. These games were about gaining experience in playing internationally with some of the best teams in Canada. Back in the United States, Cooper Union’s basketball teams are nearing the end of their season. The women’s team had its senior night on January 25th, celebrating the seven seniors who will be graduating this May. The men’s team had a game against King’s college, which due to their hard work resulted in a great game. The men have an art school tournament coming up in two weeks with Mass Art, RISD, and the New School. The men’s volleyball and women’s basketball team just had their games this past weekend so stay tuned for those scores. The South Carolina trip is the start of the men’s tennis team’s season during spring break. Both men’s and women’s basketball teams are also invited to train for the upcoming seasons. ◊

As the fall semester comes to a close, the Men and Women’s Basketball teams have had a couple of intense matches to end the semester. The men’s team played Rhode Island State of Design out in Rhode Island, which was a very close game. Their next game was against the New School and they played hard, making the game a great one. This past weekend, they played against Lincoln College, a small school up in New England with a very strong team.

The women’s team played Vaughn College, a local school for Aviation, and Hampshire College, a private liberal arts school in Massachusetts. Both of these games were very close, causing heart rates to go up as the game progresses. This past weekend, they played against Briarcliff, a school out in Long Island with a Division 2 team. They played their hearts out and even though they lost, they learned a lot from it. That’s it for this semester; good luck with finals! ◊

The basketball season for both the men and women’s teams has just begun. The men’s basketball team went to St. Marten at the end of October for a game and intensive training as well. It is a trip they have done every year and every year, those four days create an unbreakable team bond among the men. The men played their first game in the states against CIA and played their hearts out, as they always do. The women’s team went down to Florida the first week of November to train as well. They also ran a clinic with ninety first graders, teaching them how to play basketball and for some of them, it was the first time they ever touched a basketball. The first women’s game is on Saturday, November 16th at Cooper against Vaughn College and their second game is on Sunday, November 17th in Massachusetts against Hampshire College. Stay tuned for the next article where the scores will be posted! ◊

The soccer team left on Friday to head out to Cape Cod for training for the season. The men’s basketball team just had its first official game with the New School. They also recently had their Alumni game, where graduates who were on the basketball team come back and play against the current team. The scores are listed below. ◊ 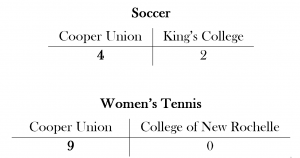 As the weather starts to get colder, the athletes become more dedicated to school and their teams. The women’s volleyball team has its last game coming up in the next week while the women’s and men’s basketball teams will have their first games in a couple of weeks. Both the soccer and women’s tennis teams are playing hard this season. The men’s volleyball and tennis teams start their season up in the spring, but you can still find them at the women’s practices helping out their fellow classmates. You will find the scores from the previous soccer and women’s tennis games listed below.

Cooper students are known for having their lives taken over by academics before the first month of school is over. On top of academics, most of us also have jobs, take part in clubs, and participate in sports. For the scholar athletes at Cooper, sports start the week before school starts down in Cape Cod, Massachusetts. Most of our athletes go down for a week to train, learn new drills, and create a special bond with our teammates. Students who are involved in sports were not the stars of their teams in high school, and some have never even played the sport before coming to Cooper. However, watching them play after Cape Cod and just a month or two of practice, you would never be able to tell.

For the basketball and volleyball teams, practice is generally on Friday and Saturday nights. For the soccer and tennis teams, practice is usually on Tuesday and Thursday mornings. The cross country team practices throughout the week, mornings or nights, depending on their schedules. Soccer, women’s volleyball and women’s tennis season have already started and the results for their first games are listed on this page. ◊ 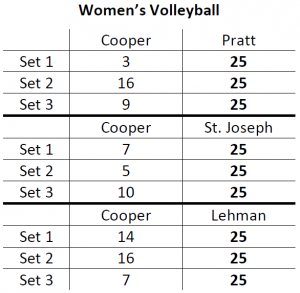 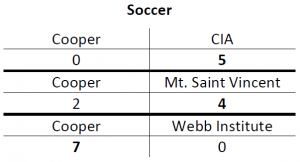