As September draws to a close, the new online system that was purchased for the school, Ellucian’s (Datatel’s) data system Colleague, will (ideally) be ready for students to log in to as soon as this week, according to Dean Lipton. The students and staff will go through Web Advisor in order to use the system. At the moment, there is a fair amount of faculty that are already logging on. Once you log on, you are taken to a main screen where you indicate whether you are a student, faculty, advisor, etc. This takes you to another page where you will be able to see your transcript, progression towards graduation, financial aid package, and just about everything else you need.

This system will replace SAIS, which explains why recent attempts to log into SAIS haven’t worked. Faculty will have access to their class roster and will be able to find contact information for their students if needed. Students haven’t been able to log into the new system yet because IT has to ensure that every student has a working Cooper e-mail. Each student will be assigned an ID number and temporary password associated with their Colleague account. All of the old information is being transferred into the system and has to be double checked to insure there is nothing missing or inaccurate.

Colleague will have all of the offices collecting data from one source, eliminating any disconnect between offices. Every office will also have the ability to edit this one source of data, which may or may not be a good thing. While this ability to edit data may encourage more communication between various offices, it may also muddle identifying who makes edits to certain data.

There are still some details being hammered out, such as how advisement will be taken care. It could involve a student making a schedule they are interested in and sending it to their advisor, who would then offer the student their opinions and suggestions.

Everyone involved in working on the system has been working very hard to make it the best it can be and hope to have all students registered online by November, which at this point seems realistic. Colleague will be constantly updated s the school year goes on, and according to Dean Lipton will be good for Cooper.

Anyone who tried to pick up their financial aid check on Wednesday went through the wonderful process of being told they weren’t ready and to come back the next day, three times. On Friday, not only were financial aid checks not being able to print but almost no check could be printed.

In order to compensate, they did offer emergency loan checks but only for dire emergencies. Datatel, the new system that we are switching to, did manage to find the problem but are still in the process of fixing it. If you attempted to log on to sais, you were pleasantly surprised with the following page: 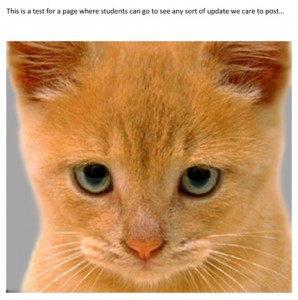 TCP: How have your first few weeks/month as dean been?

Alan Wolf: I’ve been working long days, 7 days a week. I always thought of myself as a hard worker, but this has been a whole new level of busy. I thought it would get worse once school started but fortunately, it’s calmed down. We had lots of issues simultaneously: we are transitioning from Agent, the system that gives us access to student records to a new system called WebAdvisor. Any database change like this is painful, but we made the transition at the beginning of a semester, when we had a critical need to access those records for advising. We’ve also had problems with Moodle, which now seem to be resolved. All of this as we are focused on plans for “reinventing” the institution. So it’s been an incredibly stressful last few weeks. It’s probably not easy transitioning to Dean at a normal time in an institution. This hasn’t been normal. I have a new respect for administrators who attend endless meetings and do a hundred things a day that are required for the day-to-day operation of the school, and still have to find time for the really critical large tasks.

TCP: Do you have any long term or short term plans as dean for the engineering school?

AW: Well I’m an Acting Dean so I won’t get to work very long on long term plans, although I hope to start some initiatives. My hope is to be back to full time teaching by next September. The dean search committee will be restarting the search for a permanent dean soon. Filling a position like this generally takes 6 months or longer. Even if we identified someone in the next couple of months, they’re probably a dean elsewhere. Their institution is entitled to a reasonable amount of notice.

In terms of short term plans, it’s very simple. The president’s welcome message says that the deans have to prepare by November 15th plans for the trustees. I’m coordinating that in the School of Engineering. What we have done is formed five subcommittees. The five subcommittees are: An undergraduate tuition subcommittee. A graduate tuition subcommittee. That’s a misleading name because that could actually be any tuition-charging-program that isn’t our current four year undergraduate program. So it doesn’t have to be a masters program. Those two committees are for revenue generation. The three others are not directly tied to meeting our financial targets. Our financial targets are that we (the School of Engineering) needs to raise 3 million dollars a year in within five years and 6 million dollars a year within eight to ten years, in 2012 dollars.

The three other subcommittees: one is a program on the undergraduate program, meaning studying what we can do to improve the quality of our undergraduate education. There’s a communication committee, studying communications within the school of engineering as well as the other parts of the school. Communications also includes things like the outside world getting to know about us. The last committee studies culture and community. How do we make the place more alive? student morale, faculty morale. It’s an interesting thing that at cooper when we have speakers come from the outside world, in most engineering schools, attendance at such talks might fill a large lecture hall. At Cooper, it’s often hard to get 5 people to show up for a talk. What is it about our culture that disinclines people to participate in events like this? The five committees are going to prepare their five separate reports. We’re going to work together to turn them into something integrated that we’ll turn into the president. He’ll bring that to the board early December to cogitate on the future of the school of engineering. So that’s the short term plan. Also we have ABET coming. ABET comes December 1st. They leave December 4th. The Board meeting is December 5th. So it’s an interesting week for us. We’re hoping to get a six year accreditation in each of the four degree-granting programs from ABET and we’re hoping the board looks favorably on our plan for the future.

I am optimistic. While we are looking at a daunting financial problem, we have President Bharucha and V.P. Westcott working incredibly hard to deal with these problems. Looking at new initiatives, considering every possible financial plan, looking for Angel donors. I’m astounded by their energy and their commitment. It’s amazing. T.C.’s been here for about two years, Jamshed’s been here a year. They’re showing the kind of commitment to the institution that you’d expect from someone who’s been tied to the school for thirty years. They are working harder than I’m working, and that must involve some sort of time-distorting relativistic effect. So I’m optimistic. If any pair of administrators are incredibly skilled and devoted and selfless, it’s the two of them. They are incredibly inspiring. The reality is that I accepted this job because I have confidence in the two of them and I wanted to be part of their team.

TCP: Do you have any comment on professor Uglesich resigning so suddenly?

AW: I sent out a letter to the juniors and seniors which was my comments followed by, unedited, what [Professor Uglesich] cared to say. I didn’t send it to freshmen since they’d be arriving at a school in which he was already gone and the sophomores never had him. But I thought juniors and seniors were entitled to see whatever it was he cared to say, so I asked him to prepare some remarks he wanted to share with the community. I was really sorry to see him leave. I thought he was a terrific classroom teacher. I thought he was doing a great job and I’m sorry to see him gone.

TCP: Do you have any advice to the freshmen?

AW: You can quote me on this: I’m not going to tell them to study harder. That’s usually what I say. The reason I’m not going to say that is because I’ve gotten feedback, very recently, from a few companies that have employed Cooper Students over the years. Here’s what they’ve said: they say that Cooper students are smarter than students from other engineering schools. But they’re less skilled at communications, at presentation of material and they’re less well rounded. So students need to focus on that too. Being an engineer is not just about grinding through calculations. It’s about interacting with clients, sometimes finding developing new business, preparing reports that communicate effectively. That means they need to develop their writing skills and their public speaking skills. It’s something students have to focus on. A lot of potential employers are looking for people who have people skills and communication skills. That means paying attention to Humanities courses and commuication workshops. Are you shocked to hear this out of me?

AW: This is a new position for me because I’ve been sitting in these sort of meetings in recent weeks. In terms of the financial crisis, current students, and even next year’s students, are grandfathered in for no tuition. It can’t be true that current students will get tuition bills. I think current freshmen should focus on their education and count on the efforts of these committees to fashion a plan for the school of engineering that will make us sustainable. If it wasn’t clear from Jamshed’s welcome letter, the plans for the three schools are entirely separate. We could have three different routes to survivability. Each of us have dollar target: the five year target for architecture is 1.2 million and for art it’s 1.8 million. For us it is $3 million.

TCP: Is that proportional to total students?

AW: It’s actually proportional to the total cost of each of the programs. Our share is half, is because it costs half to run the school of engineering. I think it’s a good thing that the fates of the three schools have been disconnected, because what is acceptable to the three schools as a means of survival or sustainability will likely be different. What makes sense for art might not make sense for engineering. But I think freshmen should focus on their education and put their confidence in very hard working faculty and administrators as well as very concerned trustees to pull us through this.

I was thrown out of Cooper in 1976 because we ran out of money. That’s when the math and physics degree programs were terminated. Here we are thirty-some-odd years later. We’re out of money again. This time the financial problem is more serious. But we pulled it out of the fire last time and I believe we will do it again this time. It’s going to require some serious reinvention of the institution. The president has emphasized that it’s not just about money, that there are also serious quality issues. He wants to ensure that we are not just going to meet our dollar targets, but that we have poised ourselves to be equal to the best.