Artwork by Brandy Vazquez, a student in the Saturday Program

On November 1, a Joint Student Council (JSC) resolution was passed that called for the conversion of all restrooms on campus to gender neutral. This followed months of discussions and a series of policy changes, enacted over the course of the past year or so, that have changed several bathrooms in both the Foundation Building and the NAB to gender neutral in an honest effort to make the campus and the community more inclusive, more welcoming, more aware of the diversity present at Cooper Union.

Many students from the engineering school felt that they were not consulted before the voting process or included in the conversations about expanding the number of gender-neutral facilities beyond the few that were previously established.

On November 16, the Engineering Student Council (ESC) held an open meeting to discuss its governance. ESC serves to be accessible to engineering students as an open avenue of communication between students, faculty, and administrators, as well as a context in which students can raise concerns and share their perspectives. Its shortcomings in the handling of this issue were alarming to many members of ESC and to students, so the forum was a way for ESC to gain insight on how it could have been more effective at reaching the student body.

Both supporters and non-supporters of the JSC resolution joined ESC members to share thoughts about how the processes of both ESC and JSC failed to adequately engage many students in the community. Dean of Students Chris Chamberlin was also present to answer any questions.

At the meeting, representatives and Administrative Chairs began by answering questions that students had about the inner-workings of ESC and the JSC. Students took particular interest in this portion of the discussion because it offered them insight as to how voting works and how the resolution was passed. Students asked how each of the three schools are represented in JSC. Administrative Chairs stated that there are approximately the same amount of representatives from the art and architecture schools, while there are a few more representatives from the engineering school.

Students also pleaded that representatives express the thoughts and concerns of their sections and avoid allowing their personal opinions impact how they advocate for their section.

There was also mention of how to potentially improve JSC meetings. Suggestions included making the agenda of the meetings available to all representatives in advance so that they can better inform the student body of what will be discussed and what might be voted on. Others suggested that it might be wise to motion for a vote on a resolution at one meeting and actually vote on it during the following meeting.

According to the ESC website, the JSC constitution has not been revised since 1998. ESC Ad-Chairs stressed that while it is possible to make changes to the JSC constitution, any such changes should maintain the balance in representation between the three schools. For example, not voting at the same meeting at which a resolution is drafted was a change that many engineering students and representatives welcomed.

These are just highlights of what was a very productive ESC meeting.  You are encouraged to attend future ESC meetings and always relay your concerns, to any degree of specificity that you wish, to your representative. 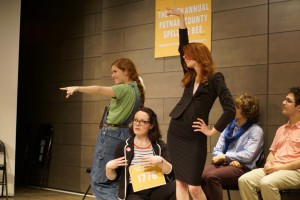 On December 5, the Cooper Dramatic Society debuted its production of “The 25th Annual Putnam County Spelling Bee” and it was fucking great. Drops mic. Walks out. Yeah. They killed it.

“It was fucking great. Drops mic. Walks out. Yeah. They killed it.”

Directed by Joseph Viola and co-directed by Daniel Galperin, the show’s entertaining and impressive cast exceeded all expectations. Starring a whole host of Cooper students, friends and alumni, the cast was fueled by the energy of the audience on its way to a spectacular show.

The production was masterfully executed and a riot from beginning to end. The performances of the cast members won the hearts of the audience. Anthony Traina and Erica Umhoefer, both seasoned veterans of the stage, anchored the cast. Kelsey Mitchell, no stranger to the Cooper stage, played Logainne SchwartzandGrubennierre, an elementary school student with an adorable, endearing lisp that complemented her strong high notes.

Denis Shishkov and Cooper alumnus Alejandro Acosta played Logainne’s overbearing fathers who got the audience roaring with their on stage ‘daddy conference.’ Dennis Burgner performed excellently in the challenging role of William Barfee, a quirky, cocky, and intense boy who suffers from a mucus membrane disorder. Also, the magic foot, amiright?

Other highlights included Deanna Kovalcin’s remarkable rendition of “The I Love You Song.” Matt Ferreira’s charming solo about the unfortunate raging meat stick boner of Chip Tolentino, and Peter Wang’s portrayals of Jesus Christ and Leaf Coneybear were also winners, judging by the laughter of the audience. Since two roles couldn’t satisfy the talented Peter Wang, he also undertook the choreography of the musical with the help of Amanda Lombardo. 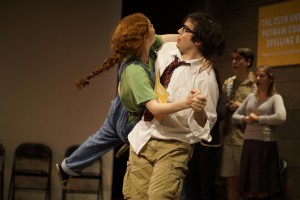 Camilo Gaitan played Mitch Mahoney, an ex-convict-turned-comfort counselor who consoles disqualified contestants with hugs and juice boxes. Gabriela Godlewski’s portrayal of the uptight and dedicated Marcy Park probably resonated a lot with students in the audience. Her “Just Fuck It” attitude at the end of her performance is something many students may wish they had.

Included in the hilarity were appearances by audience members Justin Richter, Kenneth O’Neill and Calvin Liu. Proving the depth of all characters’ improvisation skills, all actors were ready for any audience contribution, including but not limited to Kenneth’s correct but irrelevant spelling of the word “Mexico.”

If you missed “Spelling Bee,” then make amends by checking out the Cooper Dramatic Society’s spring production. You won’t be sorry. 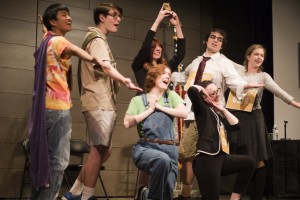 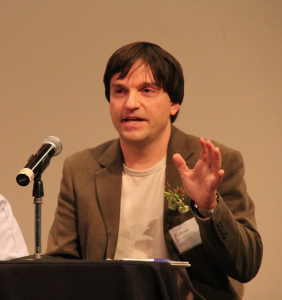 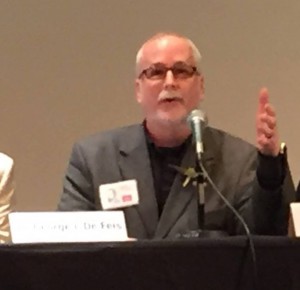 On December 1, the Cooper Union Alumni Association (CUAA) announced the results of the Special Election for two seats on the Board of Trustees (BoT). By the votes, Adrian Jovanovic (BSE ’89) and Scott Lerman (Art ’81) will become new Alumni Trustees. With the most votes, Jovanovic will be seated on the Board following the BoT’s quarterly meeting in December. After that, Lerman will formally become a Trustee in June 2016.

Jovanovic’s prior experience includes two years as President of the Committee to Save Cooper Union (CSCU) and as such, he was the lead petitioner in the lawsuit levied against the BoT. After intervention by the Attorney General, the lawsuit was settled on September 2 with the release of the Consent Decree. Jovanovic also brings his experience as a co-founder of a software company and professional experience in the software industry.

Lerman was also closely linked to CSCU. Though he was not a petitioner in the lawsuit, Lerman played a role in CSCU’s communications efforts with the school, the news media and the wider public. Moreover, during the Special Election, Lerman was endorsed by CSCU. Lerman’s other prior experience includes founding his own branding consultancy as well as experience as a faculty member at the School of Visual Arts.

Together, it is clear Jovanovic and Lerman have an “intimate understanding of the current situation”—a fact that will only help their contributions to the many critical decisions the BoT needs to make in the coming months.

The Special Election is also noteworthy for being a record-breaking election, with a final tally of 1,685 votes cast.

The heat has dissipated at the 29 3rd Ave dorms. Several cycles ago, I and several other Cooper students fumed over suspiciously wet results. After following this tepid trail, I’ve come to the decision to air some dirty laundry. Every other week I go down to the fourth floor to wash my clothes, only to have my efforts wasted on this sad sorry heap of soggy clothing. It’s Dawned on me that the dryers in the old dorms must be on their way out. We should just call them diers at this point, because they just don’t seem to work. On the hottest setting they leave the clothes damp enough to grow a mold culture on, and I’m not talking about the Menschel carpet.

I’ve been putting in my money into these machines, only to get a heap of mildly damp sheets and a single sock. It’s been dry-ving me crazy. It really must be my luck. Yet I foolishly swipe my card, again, to drip in the same miserable results. It’s enough frustration to make me cry, but my clothes have enough water to spare, so I’ll just save mine for another day. I really don’t want to be the one to complain, but look at where I am now. We have been going through this for a while. Luckily Cooper is moving into an Era of change, where clothes will be dry and tuition will be free. 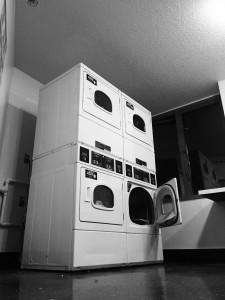 DeVonn Francis (A ’15) and Angus-Buchanan Smith (A ‘16) unveil their collaborative independent business practice, Enroot, in the colonnade. Enroot is their collective desire to strengthen ties between communities and agriculture. In the colonnade, a familiar atmosphere envelops the space. Stretching for much of the length of the colonnade, wooden tables bring warmth, and give presence to the otherwise vacant space. Moments of laughter and conversation fill the alley. As visitors converse over food and drink, looped videos are displayed, marking the two’s journey in creating Enroot. Among their videos is a list of a staggering number of backers and supporters—more than two hundred mentions. Yet this gesture shows the importance of community and making—the crucial backing of their endeavor.

Sam Kaufman opens his senior show Sam’s Club on the 2nd floor landing of the Foundation Building on Tuesday, November 17. Kaufman uses a myriad of building materials including drywall, sheet metal, wood, and glass along with warped paintings and lenticular images within his installation. There is a level of comfort in the resemblance to home, and we have been given an opportunity to find ourselves within the work. The configuration of materials redefines and changes our perception of space, as distinctions between interior and exterior are blended. Kaufman contorts our orientation within the space, as he re-configures passages and creates openings with windows and shutters between columns. Movement through the space becomes more eventful as you move past, forcing thirteen images of bathers to appear and disappear from view.

Katherine Magradey holds her show in the 6th floor lobby of the Foundation Building, filling the vacuous space with three towering membranes of wax paper. She has transformed the mundane material with heat and scale. As we move through the channels between these sheets, the room becomes almost cavernous, yet it is contrasted by the delicacy of the material. The colossal ten-foot high and thirty-foot long creations tower above us. Magradey’s use of lighting accentuates the semi-opacity and undulations of these pieces. Arranged on the left, Magradey’s smaller prints echo and play with texture and materiality of unconventional media. Her prints contain many color variations with repeated overlapping cloth texture. Magradey’s prints create spaciousness within two-dimensional media.